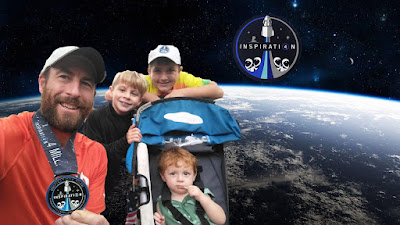 Disclaimer: I received a free registration to the Inspiration4 Mile Virtual Run to review as part of being a BibRave Pro. Learn more about becoming a BibRave Pro (ambassador), and check out BibRave.com to review, find, and write race reviews!
Checklist for the Inspiration4 Miler Virtual Run
10, 9, 8, 7, 6, 5, 4, 3, 2, 1, and GO!!!
I just ran the Inspiration4 Mile Virtual Run this past week. Well, actually I ran it twice. I ran it separately with both of my two older boys. When I told them about the Inspiration4 mission they were both immediately interested. They both have already shown some interest in space exploration, pretty standard for all kids under the age of 10 I assume, but their interest might be a bit beyond the standard. Of the two, one of them has worn his NASA shirt to the point of extreme fading and the other is always telling me about what he learned watching the YouTube channel of a former NASA employee. When I showed them the race swag with the Inspiration4 logo, they were both committed to running the 4 miles! 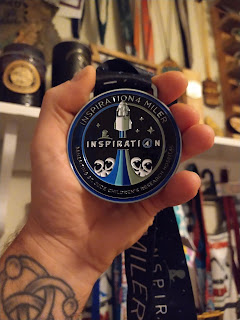 So why did I run it twice if they were both running it? For a couple reasons, but primarily because they run at very different paces. I wanted to enjoy this run with each of them and I wanted them to both enjoy it. I didn’t want to have to dictate either of their paces based on the other’s pace. I just wanted to run with each of them at their pace. Every recent attempt of the three of us running together has basically been me trying to get the one to slow down while I try to encourage the other to pick up his pace. It may be a bit of brotherly competition coming into play there and I have NO clue where they would get that overly competitive spirit from… Ultimately, doing this ends up making the run less enjoyable for all of us, hence the reason why I wanted to run it separately with each of them. Additionally, this provided some bonus one on one time for me with each of them just to chat and enjoy the miles.
Sharing my passion for running with my boys has been one of the greatest experiences that being a father has brought me. Anytime I can share a running experience with my boys is a blessing! The fact that the Inspiration4 Mile Virtual Run provided the inspiration and motivation for me to share some happy miles with my boys was the most valuable takeaway for me. Yes, the swag is super cool, I appreciate the development and advancement of space travel technology, I love that the associated fundraiser benefitted St. Jude Children’s Research Hospital, but ultimately what was most meaningful to me and closest to my heart was the time and miles spent with my boys.