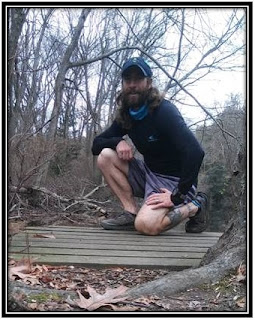 Disclaimer: I received a Runderwear Men’s Running Base Layer and Neck Warmer to review as part of being a Runderwear Ambassador.


I’m pretty sure I’ve mentioned it several times in this blog in the past, and I am sure I have made the statement multiple times on social media posts: I prefer hot weather running over cold weather running. I think I’m more of a minority amongst runners with this preference, but given the option of running in swamp ass, hot and humid conditions versus bitterly cold freezing temperatures, I’ll choose the swamp ass every time. With that said, maintaining my motivation and desire to run over the course of colder winter temperatures and shorter daylight hours becomes quite a challenge for me at times. Which makes the winter running gear I use an even more important factor in whether I stick to my training plans. 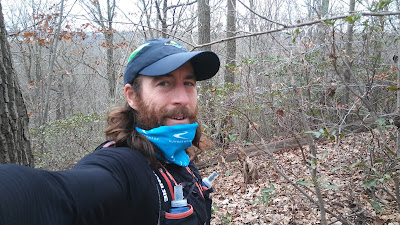 I received two winter running gear items from Runderwear: the Men’s Running Base Layer and a Neck Warmer. I tested both this past holiday weekend while running trails at Hartshorne Woods and Huber Woods in Monmouth County, NJ. Conditions were mild for late November with daily highs ranging from 55-62 F. I planned to be out for some longer days (an 18 miler and a 10 miler) on the trails, so I wanted to wear something that would keep me warm during the cooler part of the day and not make me feel overheated during the warmer part of the day. I went out wearing only the Runderwear Men’s Running Base Layer and a Neck Warmer above a pair of shorts. It turned out to be the perfect compromise for warmth and comfort throughout the varying temperatures of the day.

Men’s Running Base Layer
The Men’s Running Base Layer was designed for cold weather running with its moisture wicking fabric to keep you dry and warm in cold conditions. The fabric provides dynamic heat control with its mesh panels that contain micro perforations that increase breathability which assists with moisture (sweat) removal from your skin helping to keep your core temperature stabilized. The shirt design, like their underwear, is completely seamless and label-free further reducing any risk of chafing. All keeping in line with Runderwear’s chafe-free guarantee. 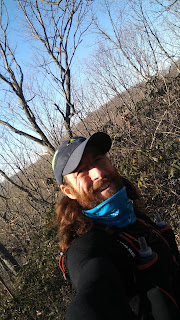 There’s not a lot of print on it, but the print that is there is hyper reflective. I found this out as I was making the short run back from the county park to the house as it got dark. I was regretting not bringing my headlamp as I ran on the side of a road with an extremely narrow shoulder, thinking what a terrible choice it was to wear a nearly all black long sleeve. I got nervous every time I saw a set of headlights, but noticed the reflection of the Runderwear logo and print on the front of my base layer which provided a bit of comfort.

The last feature of the running base layer that really stood out to me while testing it out was the foldable sleeve ends. The sleeve ends are designed to fold out and over your hands providing built mittens at the end of your shirt sleeves. It wasn’t cold enough that I needed mittens, but I thought the feature was super ingenious, convenient, and well thought out. It’s a well designed feature as the extra material at the end of the sleeves doesn’t feel bulky and is barely even noticeable until unfolded over your hands. I could see this feature being extremely handy for those cooler days when it’s too cold for bare hands, but warm enough that your hands get sweaty when you put gloves on. I’ve had those days where it feels like I’m constantly putting on and taking off my gloves.

Neck Warmer
The Runderwear Neck Warmer is on par with that other really popular neck warmer/face covering company that rhymes with “fluff”. It’s comfortable, breathable, and multifunctional. It can be worn as a bandana, head covering, face covering, or as a neck warmer, obviously. What sets it apart from that other popular band? Not a whole lot other than competitive pricing at only $5 a piece. That and the color perfectly matches other Runderwear attire. So if coordinated running outfits tickle your fancy, this neck warmer just might be your jam.

The neck warmer was especially useful for me as a face covering when passing others on the trail. With New Jersey’s mandatory face covering policy when social distancing can not be maintained (such as on a narrow trail), the face covering was perfect. I could wear it around my neck as a neck warmer and simply slide it up over my mouth and nose when I passed other trail users. 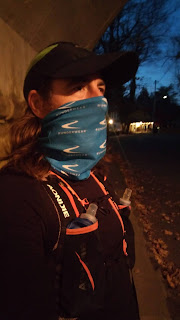 All in all, I’m very impressed with the Runderwear winter running gear after my initial weekend test runs. Although they started as a company specializing in running underwear, they have expanded and made other high quality running attire. I was already sold on their blister free socks and chafe-free underwear, but now I’m a fan of their winter running attire as well.
Scott Snell
December 1, 2020
Beast Coast Trail Running at 2:52 PM
Share