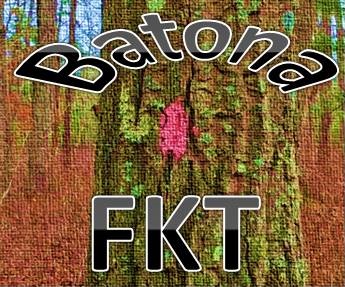 For every ailment under the sun
There is a remedy, or there is none;
If there be one, try to find it;
If there be none, never mind it.
--W.W. Bartley--

Later this month, at a yet to be determined date, I plan to run the entire 53 mile length of the Batona trail in a single out and back effort in an attempt to set the self-supported Fastest Known Time (FKT) for the route. As I write this (2 August 2020) announcement, the only existing official out and back FKT for the Batona is the supported record held by Denis Streltsov set on 1 November 2015 with a time of 1 d, 3 h, 2 m, 36 s. So, as long as nothing goes terribly wrong and I finish the route, I will at least have earned the self-supported FKT. If everything goes well, I hope to finish faster than the existing supported FKT.

If you weren’t aware of what FKTs were before pretty much all of racing was cancelled due to COVID-19, you probably are now. If not, you can learn all you want to know about FKTs at https://fastestknowntime.com/. Everything from existing routes, how to submit a new route, the three variations of support (supported, self-supported, and unsupported), and basically all other guidelines regarding FKTs can be found at the website.

I’ve never attempted an FKT before. Why am I starting now? Probably for the same basic reason so many other ultrarunners have been submitting new FKT routes and trying to better the times of existing routes, we miss the thrill of racing. We miss being pushed by competition to achieve more than we thought we were capable of and racing the clock on a standardized route is one of the best replacements we have right now. I’m not trying to speak for all runners, but for me personally, these are some of the primary reasons. I had been interested in FKTs before, but the current situation and lack of organized races are what really motivated me to seriously start planning this thing and give it a go. That along with the fact that watching a lot of my trail running friends bettering or establishing new FKTs had me experiencing some serious FOMO.

The other factor that really pushed me to take a crack at this attempt is the uncertainty of the fall racing season. Since all of my spring and summer race plans were either deferred to next year or cancelled, planning for the fall, which should be fun, has become a painful extension of the last five months of disappointments. The first thing I checked for every race I was considering was whether it had already been cancelled. And if it hadn’t, I would pessimistically wonder to myself how long it would be until they do. The situation is upsetting, but it made me think about what I wrote near the beginning of the COVID pandemic:  “When so much of your world changes so drastically and suddenly, fear and panic are natural emotional responses. Focus on what is still under your control:  how you respond.” I realized I should take my own advice. I decided I would not plan on the uncertainty of races which are completely out of my control. I would set a goal that is still completely within my control as to when, where, how, and if I accomplish it.

The next question to answer is why go for the Batona FKT. There’s a few pretty simple answers. It’s the nearest established FKT route to my home. I’ve had a history of running the Batona Trail. The first time I set foot on the trail was when I ran it in its entirety during a fat ass event. Since then, I’ve done some training runs on it and run it from the north end to south end one other time. So I’m familiar with the trail. And finally, I think it’s doable. I believe the existing supported out and back FKT is within my ability to improve.

Which brings us to the final question to answer, what are my goals for this attempt? I’ve written before about how I like to have what I call cascading goals. That hasn’t changed for my first FKT attempt. My first goal is to finish the FKT attempt in the self-supported fashion. My next tiered goal is to finish it faster than the existing supported FKT time (27 h, 2 m, 36 s). And my top tiered goal is to do it in sub 24 h. Maybe I’m being a bit arrogant for my first FKT attempt to think I can run a self-supported, 106 mile route in under 24 hours, but I like having an upper tier goal that could very well be out of my reach altogether. Maybe I’m underestimating the additional challenges that a self-supported FKT attempt entails:  the loneliness of the overnight hours, the lack of competition and comradery found during races, the lack of route flagging, the lack of encouragement from aid station volunteers, etc. But the fact remains, I know this is a possible time and I think I have a chance of being able to pull it off if I have a good day. Otherwise, it would not be on my goal list. We’ll find out if I can do it or just how much I have overestimated my abilities later this month.