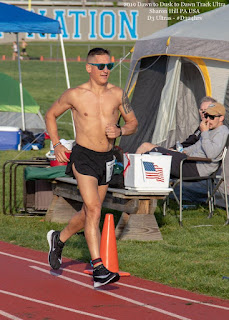 At the 2019 Dawn 2 Dusk 2 Dawn 24 hour Ultra in Sharon Hill, PA, Rich Riopel returned to the world of competitive timed racing with an impressive performance. He ran a steady and consistent race to finish with 161.8207 miles. This earned him a first place overall finish at the race and a spot on the 2019 U.S. National 24 Hour Team! It was also good enough to earn him the third best 24 hour performance of 2019. This move back to timed races came as a bit of a surprise as Rich had moved away from those races and had run mostly specific distance trail ultras since running with the 2017 U.S. National 24 Hour Team at the 24 Hour World Championship Race in Belfast, Ireland.

I admit that I may be a bit biased for including this performance in my top 5 of 2019 as Rich is a fellow New Jerseyian, but having a Beast Coaster throw down one of the top 24 hour performances of the year and represent ultrarunners on a World stage is pretty impressive in my opinion.

Last year Alondra Moody improved the unsupported FKT for the Smokies Challenge Adventure Run (SCAR) route from 23h11min to 20h11min. The previous FKT was held by Natalia Traver and set in December of 2018. Luke Bollschweiler bettered the male supported FKT from 14h50min22s to 14h28min33s. The previous record was held by David Worth and set in May of 2011. Their performances earned them both nominations for the Fastest Known Time of the Year Award (FKTOY). The SCAR is a route following the Appalachian Trail (AT) across the Great Smoky Mountains National Park from Fontana Dam over 70 miles to Davenport Gap. Given the quick turnaround on the bettering of the FKT for the entirety of the AT in recent years (Scott Jurek - 2015, Karl Meltzer - 2016, Joe "Stringbean" McConaughy -2017, Karel Sabbe - 2018), I predict we’ll see faster FKTs for well established sections of the AT becoming the target more frequently.

3:  New Male and Female Unsupported FKTs on the Long Trail

Vermont’s Long Trail saw a good deal of FKT action in 2019 with three unsupported records set. The Long Trail is a rugged 273 mile jaunt running from the Canadian border to the Massachusetts/Vermont state line. It has a long history of FKTs, with the earliest documented record I could find being set in 1978 by Dr. Warren Doyle (8 d13h25min). Nika “Early Bird” Meyers set the bar for the female record with a time of 6d11h40min. Although this is the first female unsupported FKT (there is a “self supported” record - Jennifer Pharr-Davis - 7d15h40m) for the Long Trail, it is not the FKT just for the sake of being the only known time. Meyers’ record is only about six hours shy of the male unsupported record which was set in 2010 and was just surpassed in 2019. That 2010 male unsupported record (6d17h25min) was surpassed twice in the past year, first by Josh Perry (6d9h48min45sec) then by Jeff Garmire (5d23h48min). For a record that stood for nine years to be
broken twice in under a month’s span, I believe is a sign of the rising popularity and interest in FKTs.

There have been plenty of times in ultrarunning events where a female is the fastest runner in the race. I’m not sure if it has been researched, but I would venture to guess that it is even more likely for a female to get the overall win at last person standing events such as Big’s Backyard. What makes Maggie Guterl’s performance at Big’s this past year so amazing isn’t the 250 miles she covered in 60 hours. It’s the fact that Big’s is “THE” last person standing race. It has the highest qualifying standards (a selection from Laz) of all the last person standing races. You have to earn your spot at the starting line by proving yourself with past performances. Basically, it’s an international competition of the best of the best in this style of race. And Maggie proved she was the best one there this year.

Let me start this final top Beast Coast performance with the explanation of the “1.5” and the lack of a first and second place performance. I could not place either Maggie or Wesley’s performances above or below the other. Both amazed me and I did not want to diminish either. Additionally, why can’t we have a male and female Beast Coast Performance of the Year? My blog, my list, my rules. Right? And with that, the male Beast Coast Performance of the Year: Wesley Atkinson’s two year journey to win the Pennsylvania Triple Crown of Mountain Running.

If you’ve been a reader of my blog, you know that I am especially fond of the PA Triple Crown Series. But that is not why I picked Wesley’s performance as male Beast Coast Performance of the Year. He spent both 2018 and 2019 chasing the Triple Crown and achieved that goal in stunning fashion in 2019 setting two course records along the way. It looked like he was well on his way to winning it in 2018 with first place finishes at Hyner 50k and Worlds End 100k, but due to circumstances beyond his control (the cancellation of the 2018 Eastern States 100) he would not even get a shot at finishing it that year. Wesley returned and started the 2019 series with a 10th place finish at Hyner. After that he dominated the series. He bettered the course record at Worlds End 100k from 11:37:52 (2016) to 10:50:38. This set some high expectations for everyone watching Eastern States 100 to see what he could do at that distance. Wesley did not disappoint. He finished first place and took over two hours off the course record from 20:30:36 (2016) to 18:23:47 to finish first place male finisher of the series!
Beast Coast Trail Running at 12:24 PM
Share