"We see past time in a telescope and present time in a microscope. Hence the apparent enormities of the present." --- Victor Hugo

Training and preparing for the 2018 Hyner 50k was an experience unique to me since becoming immersed in ultrarunning. If you read my report on the 2017 Hyner, you’ll know that in my opinion it was the best performance I felt I have ever had at the 50k distance. The question of how to follow what was a nearly perfect day at peak performance in my estimation plagued me. My goal for most races that I’ve gone back to run additional times is simple:  see if I can improve on my previous time. My experience at Hyner was different though; I questioned if there was any room for improvement. This probably was not the best mindset for an improved outcome, but it forced me to accept that if I am not able to dedicate more time to training then I shouldn’t expect improved results. Since I did not expect to have any additional free time to put into training, I settled to just try to match or get as close to matching my finishing time of 5:36:36. Since my overarching goal for this year is to complete the entire PA Triple Crown Series for the second consecutive year and to try to do it in a faster cumulative time, just matching my finishing time from the Hyner last year seemed like a good start. Especially, considering that I felt I had the least room for improvement at Hyner than the other two races (Worlds End 100k and Eastern States 100).

Since I knew I had very little room for improvement, I figured my best chance to better my time would be to simply push myself closer to that proverbial red line for as long as I could. Considering I felt like I was pushing that way for the most part of the race last year other than the early big climbs, that seemed like a good place to start. So that was my plan, attack the climbs from the start and hammer the downhills harder than last year. The plan started off working well. I cranked out a good pace on the short paved section (a little over a mile) of the course from the start to the trailhead. Then I hit the first climb, Humble Hill, a gain of roughly 1300 feet over the course of a little under two miles. I pushed myself hard for this first climb, a stark difference from last year where I tried to reserve my legs during this first climb for the next four big climbs that I knew lay ahead over the remainder of the 50k course. After the climb, I hammered the downhill trying not to even consider the possibility of blowing my quads out.

I continued this strategy throughout the day almost hoping to feel exhaustion. Last year at Hyner I never felt exhausted which made me think I may have been able to give more at some point. This year, for better or worse, feelings of exhaustion began to creep in around the halfway point. I was happy about it because it meant that I had pushed myself to a point that I had not reached last year. I dialed it back trying to maintain and hoping I had made up enough time early on to come out ahead of last year. Looking at my watch and estimating the miles left to the finish I knew it was going to be close. It was desperation pushing me from around the halfway point to the final aid station at the top of the last and steepest climb up SOB, looking at my watch and doing some poor math far too often. At that point, I thought I had a chance. I popped out from the trail to the final short road section to the finish with three minutes to match last year’s time. I soon realized that the road section was longer than I remembered and even sprinting the whole way I was not going to make it. I ended up finishing in 5:42:02, five minutes and twenty-six seconds slower than last year.

I took a risk and I failed. It didn’t pan out the way I had hoped it would. Did it bother me? Yes, but was it a total failure? I would argue not completely. I didn’t match last year’s time, but I wasn’t far off and there was still plenty of room for improvement at the next two races. Even using this solid logic to deagitate myself, I still wanted to explore where things went wrong. So I of course made a spreadsheet of my Strava data to compare my splits from last year to this year (Table 1). And of course I followed that up by using that data to create a column graph to visualize that data (Chart 1). Of course the Strava data doesn’t perfectly match up to the official results, but it provides an idea where my improvements were and where my shortcomings were. As can be seen in Table 1, I was ahead of my 2017 pace up until the fifteenth mile and from there I never was able to make up the difference. Interestingly, this completely coincides with my early interpretations of my performance where I assessed that it was around the halfway point that I started feeling exhausted and felt like my pace slowed. Looking at Chart 1 it is apparent that my first half of the 2018 race was an improvement over the 2017 race. Also apparent, is that my second half of the 2017 race was overall better than the second half of my 2018 race. So, the data shows what I felt was true. This concept that the data confirms my initial feelings about my performance is really cool to see, but the real question is the why and the how. Why did things take a bad turn? How did things go wrong? Is there anything I could have done differently to avoid the negative turn and come out ahead?

I did my best to examine these questions as objectively as possible, but could only come up with two decent answers. The first being the most blatantly apparent that I have already alluded to:  I went out too hard and didn’t have enough left in the tank to finish strong. You could say that this is just not running smart. I would argue that when I felt like there was little to no room for improvement, this at least gave me a shot at improvement. So, stupid or not, at least it gave me a shot. Long story short, I’m not mad or disappointed with myself for going out harder than I thought was “smart”. My second answer sounds like a total excuse or that I’m just a dumbass for allowing it to happen. And that answer would be that my shoes broke somewhere around the 20 mile mark (see pics). Now my shoes didn’t totally break and I didn’t run barefoot, but I feared that I would end up having to at some point with one major misstep. I will readily admit that my shoes had minor tears to start the race. In hindsight, I probably should have never started the race in those shoes. But, I did and I dealt with the consequences. And looking at the data, from the time I noticed that my shoes were in jeopardy of falling apart (around mile 20) I had an equal number of faster splits from that point to the finish in 2018 when compared to 2017. So maybe the greatest impact was that mentally it affected me, but physically I was obviously able to run just as fast with broken shoes looking at the data. 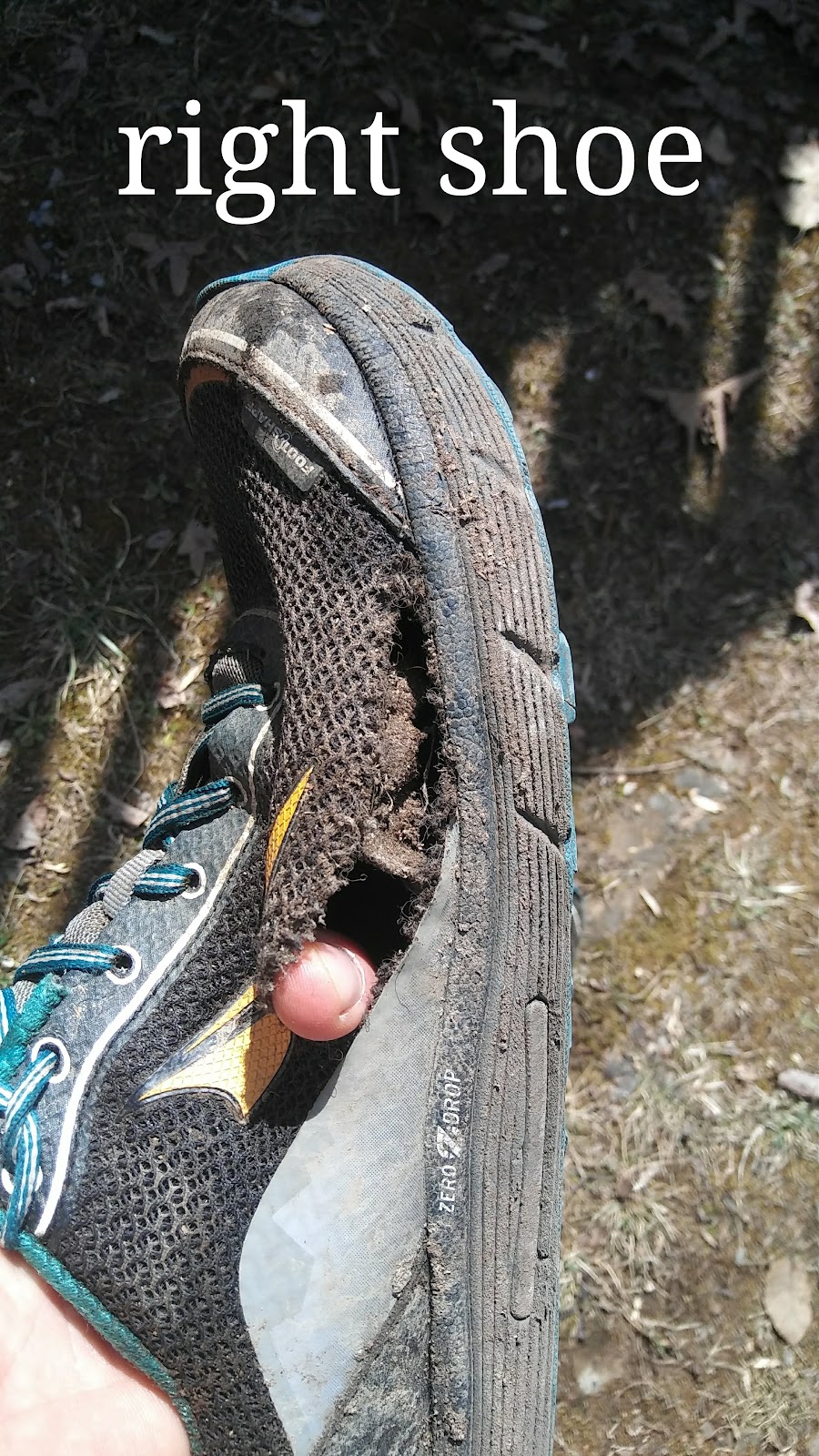 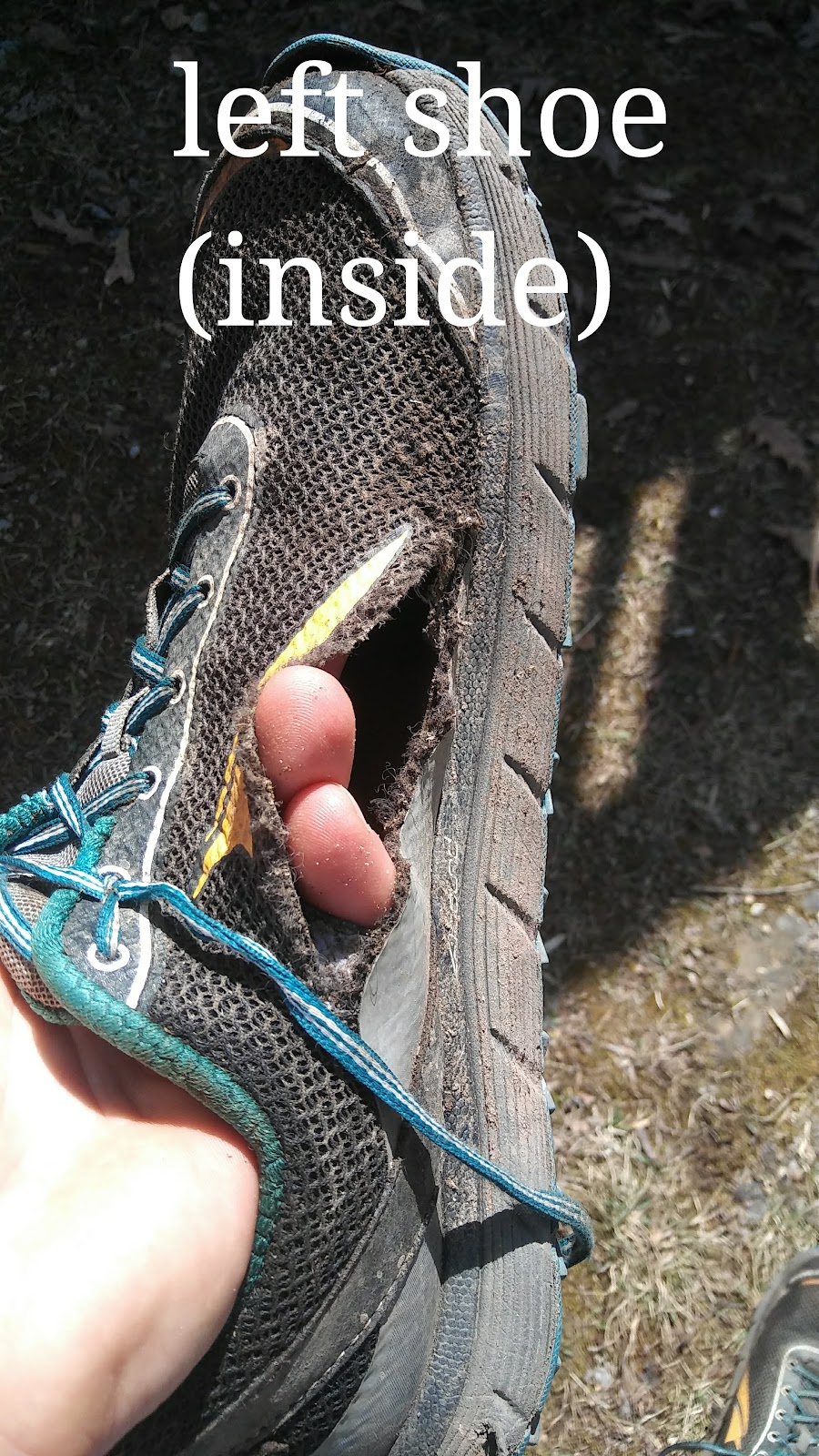 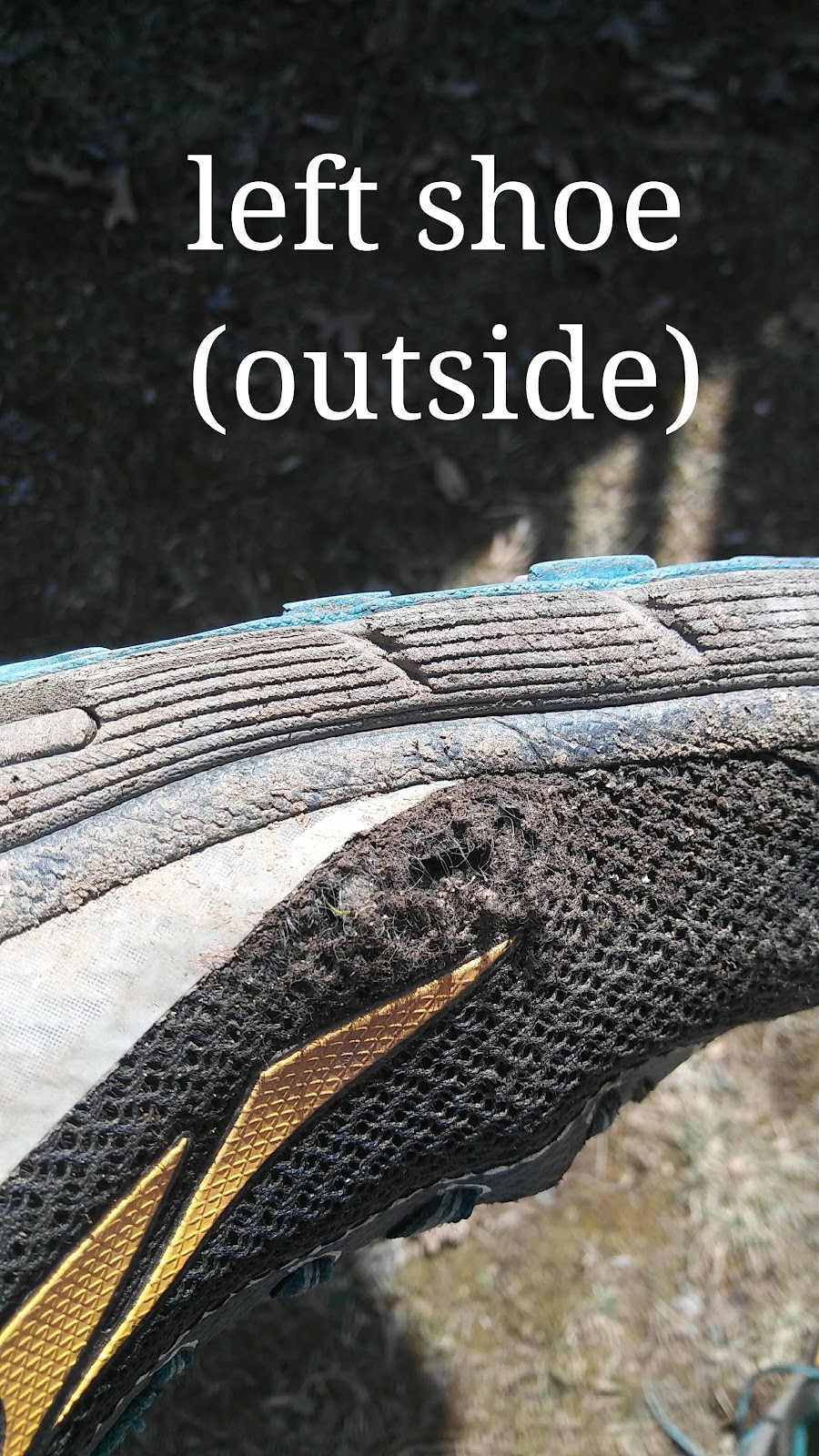 
So what’s the answer? Maybe there isn’t one. I had a better day in 2017 than in 2018. It could be that simple. Weather wasn’t vastly different. Training time and intensity was similar. Regardless of the reasoning and the whys and hows of it, I am happy that I set myself up well to be able to come out ahead for my cumulative PA Triple Crown Series time. If I am being totally honest with myself, I’d say that being only about five minutes off from my finishing time last year felt like a win. In a way, it was a hard but valuable lesson to have reinforced; if you go into a race with the same amount of preparation and effort, don’t expect improved results. At best, hope for an equivalent outcome. I feel that this lesson is especially valuable heading into Worlds End 100k and Eastern States where I am dead set on improving my times. Forget the fact that I finished about ten places back from where I did last year at Hyner and five minutes is nothing looking at how bad I blew up at Worlds End 100k and how much time I had the potential to make up there. Additionally, if I’m smart and take care of my feet while having a good day at Eastern States this year I could very well gain even more time there. Let’s just say it was more of a mental speed bump than a truly damaging setback to my ultimate goal for 2018. With the right training, appropriate effort, and smart running, I feel that my 2018 goal of improving my overall PA Triple Crown Series cumulative time is still well within reach.