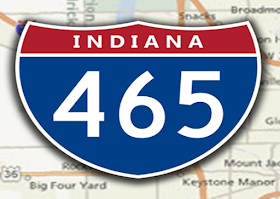 "Disclaimer: I received free entry to the 465 Challenge as part of being a BibRave Pro. Learn more about becoming a BibRave Pro (ambassador), and check out BibRave.com to review find and write race reviews!"


Having run races slightly over 100 miles in distance and lasting over 30 hours, the time and distance that I want cover at my first 24 hour race do not worry me. My lowest tier goal (to run further than 105 miles) is definitely achievable for me given my past performances. My main concern is where my fitness level is at this point. After Eastern States 100 last August, I didn’t do a lot of running. In fact, I took much of November and December off, running only 102 and 48 miles respectively. I can’t exactly explain what happened leading up to Eastern States and shortly after. Maybe I was a bit burnt out on running altogether after a summer of training and more racing than I had done any previous year. Maybe it was more mental exhaustion from the summer long cycle of training to racing to training to racing over and over. Maybe I was putting too much pressure on myself to perform at a certain level at every race I ran. Maybe it was just that running wasn’t cheering me up like it used to. Whatever it was, it affected my relationship with running and just over the last two months I am beginning to feel like I’m getting back to a healthy place and a happy relationship with running.

I needed to feel good and be happy about running again if I wanted to have any chance of reaching my goals at my first 24 hour race. The motivation to run had eluded me longer and more successfully than it ever had since I had taken up running. I credit at least part of my renewed motivation to the 465 Challenge. This virtual challenge began on New Year’s Day of 2020, which is the point that I decided I needed to get my lethargic arse back into gear if I was going to be ready for the 24 hour race I had picked to run. The 465 Challenge lasted two months with the goal being to accumulate at least 53 miles in any form of self powered movement. The 53 mile challenge wouldn’t be enough to get me prepared, but the virtual event also offered incentives to do additional miles through their looper challenge. For the looper challenge every participant tracked how many 53 mile loops they could complete during the challenge. As I write this,I am currently at 300 miles or a little over 5.5 loops. Honestly, I do not know if I would have dove into my training with such commitment if it weren’t for the virtual challenge. The support and encouragement from other participants has been great for the last two months and I will miss it as I continue to train for the next month leading up the the 24 hour race.

What do I want from this 24 hour race? Obviously to reach my bottom tier goal of a distance personal record (greater than 105 miles). But there is more that I hope to have achieved when the 24 hours have passed after the start of the race. I want to be happy about my run. I want to feel proud of what I did. I want to be excited about the other races I plan to run this year. I want to put all of the negative thoughts and feelings I had towards the end of last summer behind me and I hope that running will be a tool to help me achieve that. 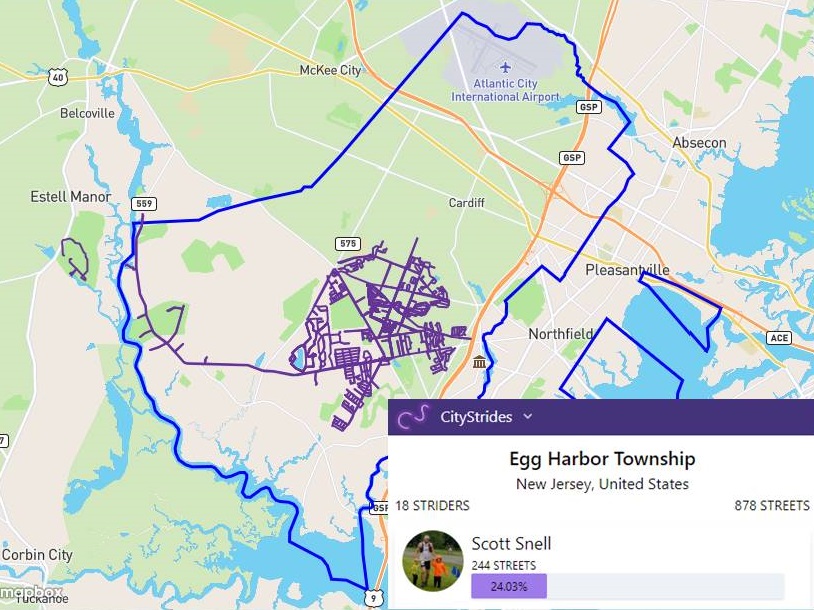 I was sure I was going to hit the 25% mark with my most recent run. It was my first long run of the year and my first long run to build towards my goal of running every single street of Egg Harbor Township (EHT), NJ. It was the longest distance run I had done since beginning to work towards this goal. I planned to do about a 20 mile run. The plan was to do about an eight mile out and back route and hit a few dead end roads off of that main out and back road to reach my mileage goal. I guess the out and backs on the dead ends added a bit more distance than I expected because after finishing my run it ended up being about 22.7 miles total. I was at 23.46% of streets of EHT complete on CityStrides before this run. I was certain that with this being my longest run since I had begun using CityStrides I would gain more than the slightly more than 1.5% I needed to pass the 25% milestone. What I was not certain of is what exactly CityStrides defines as “percentage complete”. Is it the percent of streets completed or is it the percent of total miles of streets within the city completed? After this long run increasing my percentage complete by only 0.57% (for a total of 24.03%) and previous shorter runs showing greater and unexpected percentage gains, I am guessing the percentage complete refers to percentage of streets completed and does not reflect mileage. A little digging on the CityStrides community page confirmed my guess: 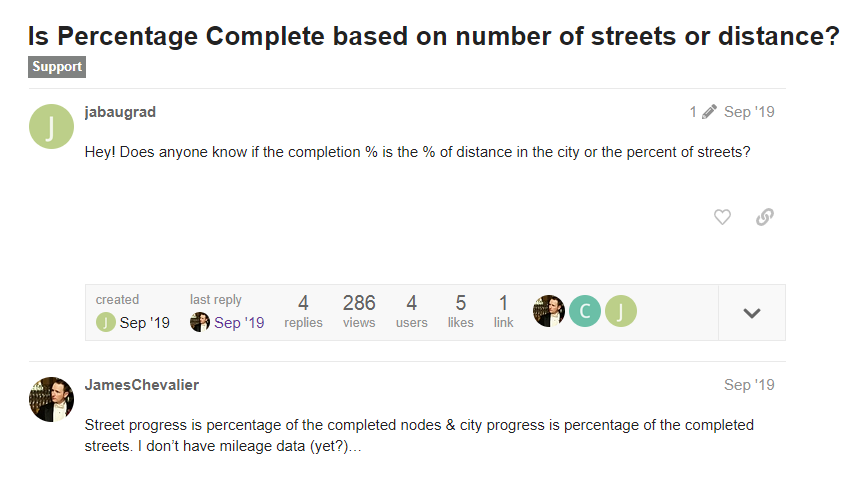 Was I disappointed to find that I hadn’t hit that milestone I was so sure I had surpassed? Maybe a bit, but in the bigger picture of this goal it’s not really relevant. After all, the goal is to get 100%. And with this experience I learned a bit more about and have a better understanding of the tool (CityStrides.com) I’m using to accomplish my goal. In addition, I haven’t yet made this project a high priority on my running agenda. I’ve been making small bits of progress on it as it is convenient and while the weather is pleasant. I still expect I’ll start making much greater progress as I get into some heavier training and as the bulk of my training returns to the outdoors.

Other "Every Single Street" blog posts:
The beginning
Week 1