“Discipline is the bridge between goals and accomplishment.”
--Jim Rohn

As I begin writing this post, I await the opening of the registration for the 2018 Eastern States 100. In just under three hours, barring a shutdown of runsignup due to a ridiculous amount of traffic, I will be registered to run the Eastern States 100 for the second consecutive year. And with that registration, I will also be registered to run the entire PA Triple Crown Series again for a second consecutive year. Finishing the PA Triple Crown Series was my top running goal last year. After finishing Eastern States, I immediately set a new goal to set a PR for the 100 mile distance at the Tesla Hertz 100 miler less than two months later. Since then, I’ve struggled with goal setting. With the new year and seeing so many other runners announce their 2018 schedules, I feel like I should have figured out what my plans and goals for 2018 were a long time ago. That wasn’t the case though. I registered for Worlds End 100k the day registration opened when I remembered how great of a course it was and thought about what I could do to improve my running of it. Just in the last week, I decided I will register for Eastern States 100 when it opens today. Doing the PA Triple Crown Series again wasn’t my goal for the year; I never made any running goals for 2018. But why fix what isn’t broken. 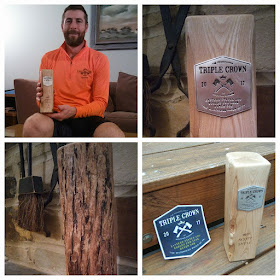 As uncreative and repetitive as it is, my 2018 running goal is to repeat the PA Triple Crown Series. Why not? I had a blast training for and running all three races. They challenged me in ways I had never been challenged before. I believe I could run at least two of the three races faster than I did. So like last year, my running goal for 2018 is to complete the PA Triple Crown Series, but to do it better than I did last year. But how do I measure that. I could measure it strictly looking at finishing times and places, but that has its limitations. Varying weather and trail conditions could play a large role in altering finishing times from one year to the next. Placement is an even more flawed measure in my opinion as it is so strongly determined by the pool of athletes competing each year. I’m not saying I won’t be comparing my finishing times from this year’s series to last year’s, but I will focus strongly on qualitative factors when measuring my success. Did I avoid those really low points when I bonked hard two-thirds of the way through Worlds End? Are my feet completely destroyed because I didn’t take the time to care for them at the aid stations of ES100?  Did I avoid making the same mistakes as I did last year? That is the main question I want to be able to say yes to at the finish of Eastern States 100.